My gnome research started as idle noodling, but soon I’d fallen deep down the rabbit hole. Once I’d scratched the brightly-painted surface of my subject, each succeeding layer of historical record brought me some new insight. It’s been weeks now, during which I’ve uncovered a wealth of interesting facts and implications, and there’s still no end in sight…

Continuing where I left off: the medieval origins of the modern-day garden gnome.

Paracelsus (real name Theophrastus von Hohenheim, 1493/94-1541), the great physician and alchemist, claimed (quite seriously) that mythological beings existed that embodied the four earthly elements (air, fire, water, earth). One of these were pygmaeis or gnomi (gnomes), meaning “earth-dwellers”, that stood two hands tall, could moved through solid earth, and would turn to stone in direct sunlight. It’s likely that this description is derived from germanic folklore of earth spirits. But, as a disseminator of powerful new ideas, representations of the gnome from the middle ages on owe much to Paracelsus’s descriptions.  He lectured and wrote in German and, a fortunate victim of circumstance, reached the peak of his popularity not long before the Gutenberg press. Teams across Europe strove to translate and print his works in Latin and other European languages in the century following his death.

Some of his texts are troublesome to source since, in the years preceding his translation, spurious texts were attributed to him. While his contributions to science are unquestionable,  his metaphysical writings, such as the Liber de nymphis, sylphis, pygmaeis et salamandris et de caeteris spiritibus are far more dubious.  Different religious and philosophical traditions, such as Rosicrucianism, became associated with his spiritual views. And then there’s much that could be said about his controversial personality, which provide even more context. For instance, as the man credited with coining the chemical term ‘alcohol’, it is maybe not surprising that his close companion, the Greek scholar Oporin, noted that there were “hardly two hours in a day” when Paracelsus was not drunk. 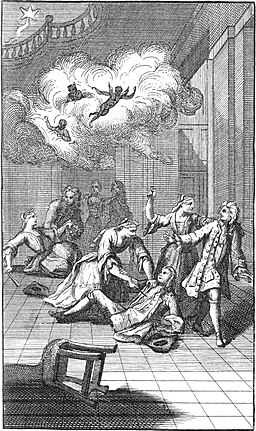 The Rape of the Lock is a mock-epic poem written by Alexander Pope that takes Parcelsus’s gnomes and sylphs and transforms them into supernatural companions. In the dedication, Pope writes: “The Gnomes, or Demons of Earth, delight in mischief.” In the poem, the gnome Umbriel is “a dusky, melancholy sprite / As ever sullied the fair face of light” that admits, at times, has raised a “pimple on a beauteous face”, rumpled petticoats, tumbled beds, caused unwarranted suspicion and messed with the “head-dress of a prude”.

Why is this important? Well, next to Shakespeare, Pope is considered the most quoted English author ever. According to Mark Forsyth, if it weren’t for the combined cultural influence of Paracelsus and Pope, the gnome (as we know him today) wouldn’t exist.

Enjoying this? Let me know in the comments. Also, please read on to Part 3.